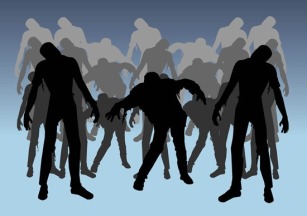 This weekend I went to the see the newest X-Men movie (X-Men: Days of Future Past) and after sitting through endless previews for depressing action movies and the dark vision of the film itself, I found myself feeling pretty hopeless. Our entertainment environment is filled right now with apocalyptic and post-apocalyptic imagery. We conjure flawed super heroes to fight cunning and powerful villains or watch the “everyman” fight off a zombie mob. You might say “it’s just the movies (or TV),” but the truth is that our entertainment feeds and expands upon our fears.

Our ultra-violent and dark popular culture speaks to and from our collective anxiety. A jobless economic recovery, a world overrun with war, shooting sprees that leave children and young people massacred, a government that spies on its enemies and citizens alike, corporate cultures that demand long hours with increasing job instability- all of these conspire to make us feel vulnerable. Our entertainment is filled with stories of heroes (either super or home-grown) who are able to survive and conquer these forces. We turn to fiction for heroes because they seem so elusive in our own lives.

There is no better distillation of this fear than the zombies who inhabit our entertainment- from The Walking Dead to World War Z to any number of video games. Zombies are people who have ceased to be human. They are unstoppable mindless drones who have the ability to turn healthy independent people into the shuffling undead.

Zombie movies are a fun house mirror of our fears- that our world has spun out of control and that we are being turned into zombies. Schools prepare our students to be good workers and work demands that we surrender our autonomy and creativity and become mindless drones. We fear that we and those around us are becoming zombies. We fear that we have become the shuffling undead.

In popular culture the only way to resist the zombie horde is to resort to hiding and violence. The siege mentality of zombie films is again a mirror of our own mentality- looking out only for ourselves, pitted against our neighbors and friends for scarce resources- fighting over the division of the pie and not attempting to make the pie bigger.

Our zombie entertainment reflects our fears. But we have choices. We can, of course, surrender and become zombies ourselves or we can resist. But we do not need to resist as our entertainment counterparts do- by building fortresses and stockpiling weapons. Rather the way that we can fight is by becoming more intensely human.

We can reach out to our neighbors and to strangers with kindness and not suspicion. We can seek out moments of connection with one another. We can stop and appreciate the arts- by listening to music, reading a book or creating something (paintings, sculptures, collages- whatever!). We can stroll calmly and slowly out in nature. We can turn off our cell phones when we come home and make the office wait until tomorrow. We can insist on our own humanity and we can resist fear.

It is not easy. Zombies have captured our imaginations because we live in dangerous and uncertain times. But if zombies are the undead, we must fight them and what they represent by becoming more fully alive.

1 thought on “Fighting the Zombie Apocalypse”