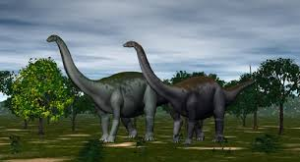 “Mom, what’s your favorite aquatic dinosaur that gives birth to live young?” I still remember my train of thought when my five year old asked me this question. It went something like this: “Umm. What? They exist? There are multiple aquatic dinosaurs that give birth to live young? When did this happen?” I think I came up with something like, “I don’t know, honey. What’s yours?” (Apparently my choices included – but were not limited to- plesiosaurus, ichthyosaurus and the liopleurodon.)

As a child I learned about dinosaurs and even remember a model set I had with little figurines. But it felt basically like there were five dinosaurs; Stegosaurus, Triceratops, Raptors, Tyrannosaurus Rex and the Brontosaurus (that apparently is no longer a thing- it is now called the Apatosaurus). As my son developed the normal child interest in dinosaurs we bought many books on the subject and suddenly I was faced with dinosaurs that not only could I not pronounce their names, but that I could swear had not existed when I was a child.

At the moment my son asked me, I was confronted with my own ignorance on a topic about which I thought I had some knowledge. I began to feel that perhaps many of the things I knew to be true were no longer so. I’d like to say that I found this realization exciting, that I found possibilities in questioning received knowledge exhilarating. But truthfully, it made me nervous, defensive and disoriented.

I remember feeling a similar disorientation when scientists announced that Pluto was no longer a planet. Or that ulcers are caused by a bacteria. Or when I encountered certain ideas about non-attachment from Buddhist tradition that were so alien to my own Jewish upbringing. And the truth is that with advances in science, new models of business, interactions with different cultures and customs, and indeed, with each new life experience, we are all regularly confronted with situations and information that challenge our default and learned understandings of the world.

How we rise (or not) to these occasions will, in many ways, determine the way we live our lives. My reaction to my son’s first questions was to evade and hide my ignorance. I was embarrassed that my 5 year old’s knowledge exceeded my own. Eventually, I learned to be proud of his encyclopedic knowledge and have come to respond with curiosity, learning from him and growing as a result..

It is not easy. Sometimes the thing that changes seems central to our understanding of the world and accepting that change means a reevaluation of our received knowledge and way of seeing. Change at this level can be frightening. Many, when faced with such a challenge, retreat in fear, preferring the certainty of old ways- even as they learn that those old ways are no longer supported by fact. Lacking flexibility, they begin to see new experiences and information as threats to their ways of living and those who challenge their views as enemies.

However, if we can learn to respond to new information and situations with curiosity and openness and not defensiveness and fear, we will find that the world is full of opportunity and new possibilities. If we can commit to being life-long learners, we can avoid ossification. If we can approach our deficits as opportunities, we can escape becoming fossils in this new world. We can grow and evolve.

So Plesiosaur is my favorite aquatic dinosaur that gives birth to live young. (But Pluto will always be a planet to me…)